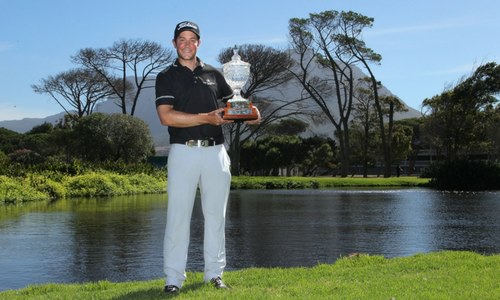 Welshman Rhys Enoch bogeyed the first two holes in the final round of the 2018 Cape Town Open but recovered to score 69 and claim a one-shot victory over Peter Karmis on a 19-under 269 total.

“I got on to the leaderboard at 13 and saw I was four behind,” he said of the eagle he made on the par-five 14th. “I was like ‘I need to make a move’. I hit a really nice drive that just cracked into the left rough, had a pretty good line to about 15-feet and managed to make it for eagle. So, that was a massive move.”

It looked like Karmis would force the round into a play-off when both players were tied at the top on 19-under, only for Karmis to miss his par-putt on 18 and drop a shot. With that, Enoch claimed his maiden Sunshine Tour victory by a single stroke at a packed King David Mowbray Golf Club.

“I just can’t be happier,” he said of his first title, “I’m just really, really happy to finally get a four-round win. You have to savour the moment.”

According to the Sunshine Tour the event was moved to the new venue due to the drought which affected Cape Town earlier in the year.

“The continuous drought and water shortage in the Western Cape is presenting a serious challenge to us all,” said the Chief Operations Officer of the Sunshine Tour, Grant Wilson.

“With this in mind, we have made a decision to move the event to King David Mowbray for this year.”

This was the first time since its inception in 2012 that the Cape Town Open was played anywhere else other than the Royal Cape.